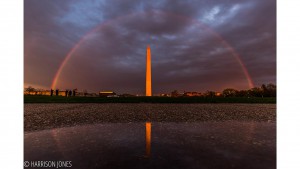 This double rainbow appeared over Washington DC on April 4, 2016. Today, April 9, thousands of Pastors and Christians will join in united prayer for repentance and revival in DC. This is a cry for mercy, not judgement. It’s a call to heaven for love, and not hate. You can join the gathering live online: http://god.tv/unitedcry.

The date of the double rainbow was 4-4-16.
That is a mathematical equation for multiplication (4 x 4 = 16).
On the fourth day of creation time, dating, division of light and dark, and the fulfillment of the physical universe were complete.
On the fourth day (Gen. 1:14) God introduces the concept of seasons.
The fourth commandment is to keep the Sabbath, to rest.
The rainbow is referenced in scripture exactly four times!
There are four testimonies to God in and through the church on the earth: Miracles, Wonders, Signs, and Gifts of the Holy Spirit.
The Garden of Eden was surrounded by four rivers.
In the New Testament, the good news of Jesus is told through the lens of the writers of four books (Matthew, Mark, Luke, and John).

The rainbow appeared 5 days before a long-planned united prayer event at the Lincoln Memorial on 4-9-16.
Five is the number associated with God’s Grace.
God graced David to defeat Goliath and free Israel with 5 smooth stones.
The ten commandments is divisible by 5 twice, thus signifying God was offering double grace to those who would follow his ways.
The book of Psalms (the Bible’s song book) is divided into five sections.
The ingredients for the anointing oil were measured in numbers divisible by 5 (500 shekels of myrrh, 250 shekels of cinnamon, 250 shekels of sweet calaumus, and 500 shekels of cassia).
The dream of Nebuchadnezzar contained a statue representing world empires in five parts.

Sixteen is a number associated with love.
In John 3:16, we learn that God so loved the world that he gave Jesus, his only son to save us from our sin.
The word Father is found sixteen times in scripture.
There are sixteen qualities of love mentioned in I Cor. 13.
The 16th time the word love appears in the first letter of John (I John 4:18), it states: “There is no fear in love…”

Nine, the date of the prayer gathering is the number for finality, fullness, or completion.
The Day of Atonement (Yom Kippur) is marked on the 9th day of the 7th month.
On the 9th day of the 5th month the Temple was destroyed and later Herod’s Temple would be burned to the ground in 70 A.D. on the same date on the annual calendar.
Cornelius, a non-Jewish man, heard from God to call for the Apostle Peter at the 9th hour of the day (signifying that the division of Jew and Gentile was finally past, the Church needed to move forward).
There are nine aspects to the Fruit of the Spirit (love, joy, peace, longsuffering, gentleness, goodness, faith, meekness, and temperance).

I would say this qualifies as a sign from God! LET US PRAY!