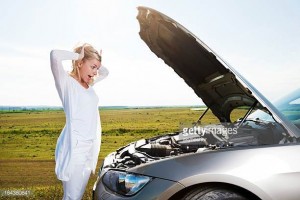 Many of us have heard those comments and yet from a study of scripture, you will see that it’s been God’s desire from the beginning to dwell with man.

Genesis 3 gives us a picture of God walking in the Garden that he had made for Adam and Eve.  The scriptures tell us that it was His desire to walk with them and be a very active part in their lives.  When Adam and Eve disobeyed God, they were removed from the Garden and thus lost this relationship.  Very few after that had the experience of walking with God (with a couple of exceptions).

God developed a new plan that he would move into a tent.  It was called the Tabernacle.  In Exodus 25 God instructs Moses to make a tabernacle or sanctuary for him so he could dwell among them.  It’s interesting to note that when the tabernacle was completed (Exodus 40) God entered the tabernacle in a cloud, and at night it looked like a pillar of fire.  You can imagine the sense of wonder that must have filled the people.

Eventually in the reign of King Solomon.  God moves out of his tent and into a fancy golden temple.  We once again read an account of how the cloud of the Lord filled the temple in 1 Kings 8.  God dwelt in a special area called the most holy place,  Just like with the tent that Moses had built. 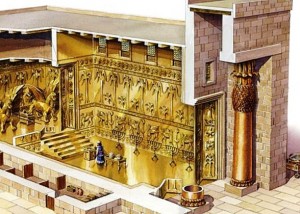 The holy place in the temple could only be entered by a priest once a year after his sin had been atoned for.

Since sin had entered humanity through Adam, this (the temple) was as close as most people would get to God.  Once again, there was a great reverence that people had for this temple.  Yet, if we fast forward to the time of Jesus, we read that some people who worked in the temple did not have a reverence for God.  That sense of awe over the centuries had been lost.  The temple was now run by rulers who cared more about prestige, power, and wealth than priests who lived to serve their God.

Mark 11:15-18 recites the story of how God in the flesh, entered His temple and saw people buying and selling doves and most likely other animals.  These “Money Changers” as they were called, had a reputation for being dishonest.  Jesus turned the tables on them (literally) and made an interesting statement quoting Isaiah and Jeremiah.  “‘My house will be called a house of prayer for all nations’ But you have made it a ‘den of robbers.’” This is a picture of what happens when we lose touch with God.  He (God) was there in the temple and yet the people who worked in the temple were corrupt and did not recognize him.  The religious leaders had lost the sense of wonder and relationship that Moses had and that Solomon had for a season.

The people suffered since the religious leaders who were supposed to bring them hope, made their lives more difficult through rules and regulations.  That is why God put on skin and got feet on the ground. 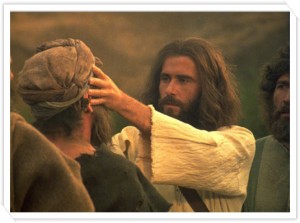 He went directly to the people, healing those who were sick, blind, lame, deaf, demon possessed, etc. He brought hope back to the people.

He did this by dying for our sins removing the requirement that God and man be separated due to sin.  God moved out of the special room he was walled off in (the most holy place).  He took up a new abode.  Our bodies!      1 Peter 2 calls us a house of living stone and we are a royal priesthood offering spiritual sacrifices acceptable to God.

We who have Jesus are the answer to a world asking the questions referenced at the beginning of this blog.  Why? Because we have God’s spirit living in us and as we make our house into a “house of prayer”  we become a house that God’s power will start to coarse through.  We will do the things that Jesus did (John 14:12).  We need to remember not to become like the Pharisees of Jesus day.  When we stop spending time with the God living in us and start to cheat people, gossip, become greedy, selfish, etc.  We, like the religious crowd lose our relationship and thus our ability to help the world around us.